On a Sunday morning, people in their hundreds assemble at a hotel near Thrissur railway station to listen to a pastor preaching the Gospel and in addition performs ‘miracles’ and wonders!
After his morning session, he has to leave for Ernakulam where also hundreds wait to listen to him in the centre of the town. That session starts at 2.30 pm.
They are not willing to leave the service after it is over at 10 am but wait for a touch ( a sort of short prayer!) by the pastor as if he is some extraordinary saint come to bless humans!! People’s faith in him is amazing.

All because they have seen him deliver people from demon possession and heard others testifying how the pastor’s prayers had healed them of cancer or other incurable sicknesses. They have heard how some had escaped surgeries after being prayed for by him. Drunkards with history of addictions going back to several decades get saved; husbands and wives on the brink of divorce get reconciled.Such things keep happening…

Not all of them are mystified by these happenings. Jesus had proclaimed before His ascension that those who believed in Him would cast out demons in His name; they will speak in new tongues; when they lay hands on the sick and pray, healing will take place.

He, who had all power and authority in heaven and earth had empowered His disciples to do wonders. What is more He had also sent the holy spirit into them to empower great things in His name.
The real mystery however is how this Manu Menon born in a Hindu family in Manarcad area of Palakkad district goes about preaching the Gospel. Many remember to have seen him as a devout person going around the famous temples of Kerala and Thrissur. How come his fascination for the Gospel?

He says after his graduation from Kalady College , he has gone all over the country visiting famous religious places seeking peace. But found no peace.

He found life meaningless and even at one point had thought of suicide when he was in Bangalore , he confesses. He had come across some tract when he was in his village and had filled up a requisition slip for a Bible.

He found life meaningless and even at one point had thought of suicide when he was in Bangalore , he confesses. He had come across some tract when he was in his village and had filled up a requisition slip for a Bible. And one day when the parcel containing a Bible reached his home, it caused quite a stir, he remembers. Another he had casually accompanied friends to a Christian meeting wherein some of the songs warmed his heart. Songs such as ‘Vazhthume Jnan En Priyane or the moving melodious songs sung by Bro D G S Dhinakaran captured his heart. These days , in the midst of a sermon or testimony breaks forth into song captivating his audience.

He began to listen to more Gospel songs . He even had gone to Bangalore in the hope that he could learn more about Christ; he felt his opportunities to know Him in his village was limited. In that city, he went to a church on the persuasion of some friends.

It was the time he was awaiting the result of an application for job in Muscat. The friends told him that if he went and prayed in the church he would meet with success. Accordingly he went, though with much reluctance, and seated himself in the last row.

That day, it was a new pastor with prophetic gifts, who was to deliver the message. In the middle of the message, the speaker points his finger at Menon and prophesies: ‘Young man, God has a plan for your life!’ The usually shy young man wanted to disappear from the place on hearing the prophesy. Because he wouldn’t like to get too involved in this strange place. What next, he wondered .And as people bowed for prayer, he sneaked out. The only plan of which he had inkling that time was his parents’ plan to get him married!—he says.

Now that is an old story. God has been using him mightily to cast out evil spirits , to heal the sick and the suffering. In the midst of it all, he keeps telling his audience that all the glory goes to Jesus Christ and he is only an instrument in His hands. He reminds them as well what Jesus told His disciples:” Most assuredly I say to you, he who believes in Me, the works that I do , he will do also;  and greater works than these he will do , because I go to My Father.”(John 14:12) One thing  Menon repeats to the audience is that ‘they should know who they are in Jesus Christ.’

Menon is an ordained pastor of the South Indian Assemblies of God (SIAG) Karnataka under which he pioneered a church in Bangalore.

In the year 2013, God asked him to move back to Kerala with a vision to bring people who are living in darkness to the light of Christ. God revealed to Him that even so called born-again believers are  not leading a life glorifying the Lord. He started his first crusade in hiruvanathapuram.

And in 2014 God wanted him to pioneer a church in Ernakulam. The worship services first started in the YMCA Hall and later moved to the Kings Lounge auditorium on MG Road. In 2015, he also began deliverance seminars in Thrissur, Kottayam, Kollam, Thiruvananthapuram and Palakkad.

His congregation members wonder how he manages to run so many programmes for the benefit of the people. He says that the joys of people who gets delivered from their troubles and pains motivates him to move on.

Pastor Menon is married to Sheeba who is a prophetess and is ewqually being used by God in the ministry.They are blessed with two daughters, Rhema and Neuma. 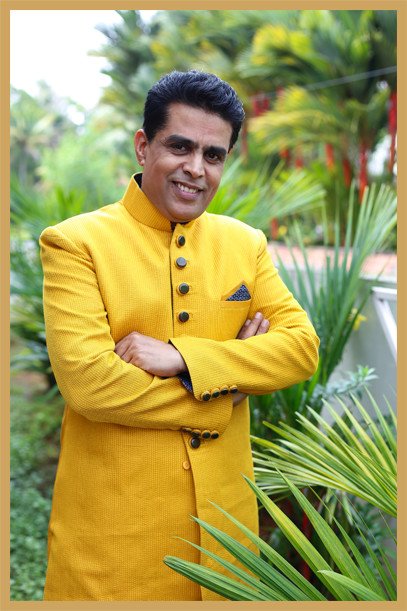